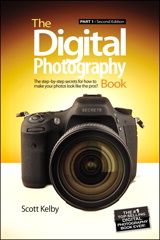 SAN FRANCISCO, CALIF – March 10, 2014 – For the fourth consecutive year—2010, 2011, 2012 and now 2013—Scott Kelby has been recognized as the top-selling photography techniques book author in the U.S., according to research based on Nielsen BookScan data.

"Scott Kelby's inimitable teaching style and infectious enthusiasm for photography continues to inspire thousands of photographers of all skill levels to pick up a camera and, with his non-techie advice, shoot dramatically better photos like the top pros in the business," said Nancy Aldrich-Ruenzel, vice president of Pearson Technology Group and publisher of the creative pro imprints Peachpit Press, New Riders, Adobe Press and Apple Training. "With that rare combination of instruction, inspiration, and humor, Scott is able to truly make learning fun. We are so honored that he is part of our Pearson family and incredibly proud of his continued success and well-earned accomplishments."

About Scott Kelby
Scott Kelby, author of more than 50 books, is president and CEO of KelbyOne and cofounder and CEO of Kelby Media Group. Additionally, Kelby is Editor-in-Chief of Photoshop User magazine and Light It magazine; he serves as training director for KelbyOne LIVE; and he is the technical chair of the Photoshop World Conference & Expo. Kelby's books have been translated into many different languages, including Chinese, Russian, Spanish, Korean, Polish, Taiwanese, French, German, Italian, Japanese, Dutch, Swedish, Turkish, and Portuguese, among others. For more information, visit http://www.scottkelby.com and http://kelbymediagroup.com.

About Peachpit
Peachpit is part of Pearson (NYSE: PSO), the international media company. Pearson's primary operations also include the Financial Times Group and the Penguin Group. Learn more at www.peachpit.com and www.pearson.com.