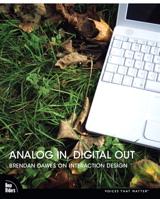 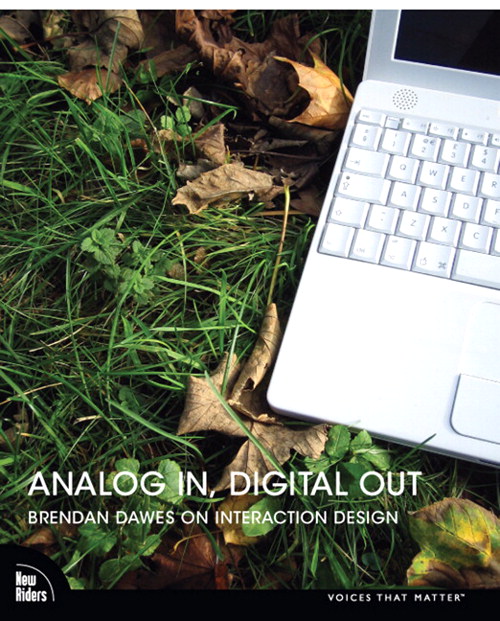 Analog In, Digital Out: Brendan Dawes on Interaction Design

Creativity is an innate human impulse, many people believe, something we’re born with but too often “grow out of” as adult lives make more and more demands. Fortunately for us, the creative drive continues to run strong in legendary designer Brendan Dawes. Habitually alert to the happy accident, and possessed of highly eclectic interests and a quirky wit, he has happened into his perfect career. Around this habit–call it a philosophy–of asking, “Why does this have to be this way? What if . . .,” Dawes has built magneticNorth, an acclaimed Web and interaction design practice, based in Manchester, U.K. In this unique book, Dawes invites readers inside a series of his personal projects to get a view of his process--his creative seeing, making, and playing. He encourages designers to look beyond the normal tools of their trade to find inspiration in the most unlikely of places: tubs of children’s clay, anonymous notes, household plumbing fixtures, jazz music, snow globes, fast-food take-out bags, airport departure gates, and more. Brilliant, original, and always grounded in the needs of users, Dawes shares both the techniques he has created and the key lessons he has learned in design: why comfort is the enemy of creativity; how mistakes can be celebrated instead of feared, and how to strip design to its purest and most powerful forms. Known worldwide for his entertaining and inspirational presentations, Dawes now brings profound insights to a book that is certain to become a classic inspiration for designers of every type. Brendan Dawes is Creative Director of the interactive design group magneticNorth, based in Manchester, UK. His clients include the Walt Disney Co., the BBC, Kellogg’s, and Coca-Cola. Dawes’ work has been featured in numerous journals, including idN, Creative Review, MacUser, Computer Arts, Create, The Guardian, and Communications Arts. He was also featured in New Masters of Flash and other books, and is the author of Flash ActionScript for Designers: Dra,g Slide, Fade. Dawes spends much of the year speaking at conferences around the world, including the HOW Design Conference and Flashforward .

The Designer's Guide to Product Vision: Learn to build your strategic influence to shape the future

The Designer's Guide to Product Vision: Learn to build your strategic influence to shape the future