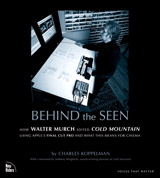 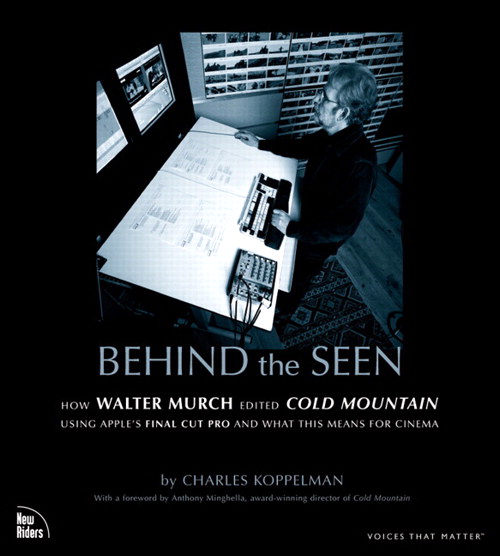 Behind the Seen: How Walter Murch Edited Cold Mountain Using Apple's Final Cut Pro and What This Means for Cinema

As the first software-only desktop nonlinear editing system, Final Cut Pro sat the film industry on its ear when it debuted back in 1999. Now it's shaking things up again as editor Walter Murch, director Anthony Minghella, and a long list of Hollywood heavy-hitters are proving that this under-$1,000 software can (and should) be used to edit a multi-million dollar motion picture! This book tells the story of that endeavor: the decision to use Final Cut Pro, the relationship between the technology and art (and craft) of movie-making, how Final Cut Pro was set up and configured for Cold Mountain, how the software's use affected the work flow, and its implications for the future of filmmaking. More than anything, however, this is Murch's own story of what seemed to many a crazy endeavor-- told through photos, journal entries, email musings, and anecdotes that give readers an inside view of what the film editor does and how this particular film progressed through post-production. The book includes, in his own words, Murch's vision, approach, and thoughts on storytelling as he shapes Cold Mountain under the intense pressures of completing a major studio film.

With Academy Awards for his work on Apocalypse Now and The English Patient, sound and film editor Walter Murch is one of the few universally acknowledged editing masters in cinema. Along with George Lucas and Francis Ford Coppola, he is one of the founding members of the Northern California cinema community. Author Charles Koppelman has been writing screenplays and directing video and film since the early 1980s, including the independent feature film, Dumbarton Bridge, award-winning documentaries, and commercials.

"An exploration inside the editorial engine-room of a major feature film - the first book of its kind ever and sure to remain the best. Charles Koppelman chronicles Walter Murch's astonishing high-wire trapeze act as he works his way through the first large-scale implementation of Apple's Final Cut Pro editing software. Must be read by anyone interested in film, computers, or how the creative process unfolds." -- Francis Ford Coppola, director of The Conversation, The Godfather, Apocalypse Now

"This is probably the subtlest and most tender account of what a craftsman brings to a motion picture ever written. It is fascinating in its detail and awesome in its gradual uncovering of the ear, the eye and the soul of Walter Murch. The book may seem technical, or 'professional,' but any reader will be thrilled by the description of a struggle and the necessary commitment to it. To be read by anyone who has ever thought it might be fun to make a movie." -- David Thomson, film critic and author of The Biographical Dictionary

"BEHIND THE SEEN is not only revelatory in terms of technical innovation, but it reads like a thrilling suspense novel. Superbly written and paced, the book captures the brilliant and daring film/sound editor-scientist Walter Murch in all his passionate and creative glory. Charles Koppelman has crafted a truly unique addition to the canon of film history, delivering a must-read for anyone interested in how movies are made." --Barry Gifford, author of Wild at Heart, Lost Highway and City of Ghosts

"... excellent, original and tremendously informative book... Koppelman's account reads like a thriller... Behind the Seen achieves something remarkable: a chronicle about technology and data, machines and methodologies which also manages to record a story of friendships and dreams-not least the dreams I have been lucky enough to share with my friend and editor over three films and for almost a decade." --from the book's foreword by Anthony Minghella, writer and director of Cold Mountain, The English Patient, and The Talented Mr. Ripley