MOBI eBook files are going away soon. Learn more and download yours now.

Page 1 of 1
There are a lot of little changes from Snow Leopard to Lion. Rather than concentrating on the big new features of Mac OS X Lion, Maria Langer covers ten smaller changes in an effort to help Mac OS X Snow Leopard users make the jump to Lion.
Like this article? We recommend 

One of the things that struck me as I was working on my latest book, Mac OS X Lion: Visual QuickStart Guide for Peachpit Press is how many little changes there are from Snow Leopard to Lion. I’m talking about the kinds of changes that a Snow Leopard user might notice right away — the changes that might have you scratching your head, wondering what’s going on.

That’s what this article covers. Rather than concentrating on the big new features, as most Lion-related articles do, I’ll cover ten smaller changes, in an effort to help Mac OS X Snow Leopard users make the jump to Lion.

Keep in mind that this article is brief on purpose. If you’ve been using Mac OS for a long time, it’ll probably provide you with enough information to deal with the changes. But if you’re relatively new to Mac OS, you may want to dig deeper; if so, I hope you’ll check out my Lion videos and book to get the additional information you need.

One of the biggest changes in Lion is simply the way Lion is sold and distributed. You can’t go to an Apple Retail Store or Online store to buy a disc. Instead, you need to use the App Store. That means you’ll need a few things just to buy and install Lion: 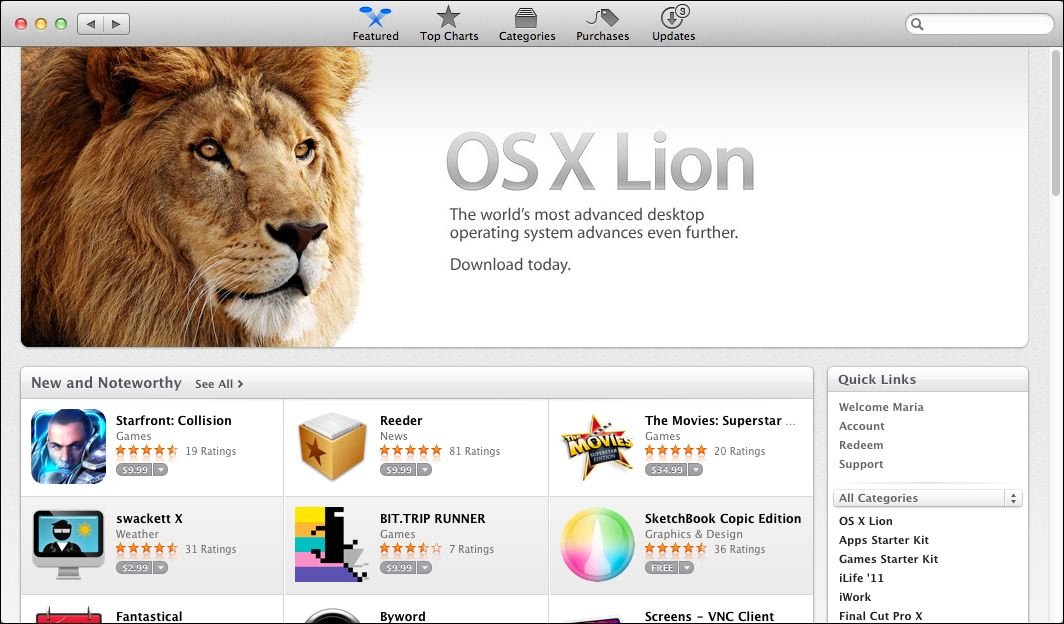 Figure 1: You can buy and install Lion with the App Store application.

Once the download is complete, you’ll be prompted through the installation process. There isn’t much to it. Just click a few buttons and you’re done.

I do want to point out that Apple claims it will sell Lion on a USB thumb drive sometime later this year. If your only connection to the Internet is as painfully slow as mine, you may want to wait and pay a few extra bucks to get Lion that way.

If you use a multi-touch device such as a trackpad or magic mouse with your Mac, you may be surprised by a sneaky change to the way it works. In Lion, scroll direction can now be changed. Not only that, but it’s set to the opposite direction than it’s set to in Snow Leopard.

What does this mean? Well, when scrolling with gestures, you now swipe down to move content down — just as you might on an iOS touchscreen. This is referred to as natural scrolling — and, if you think about it, it is. You’re using the trackpad to push content in a window in one direction or another. That’s pretty natural.

Of course, this might drive you crazy — at least at first. So you can change it. 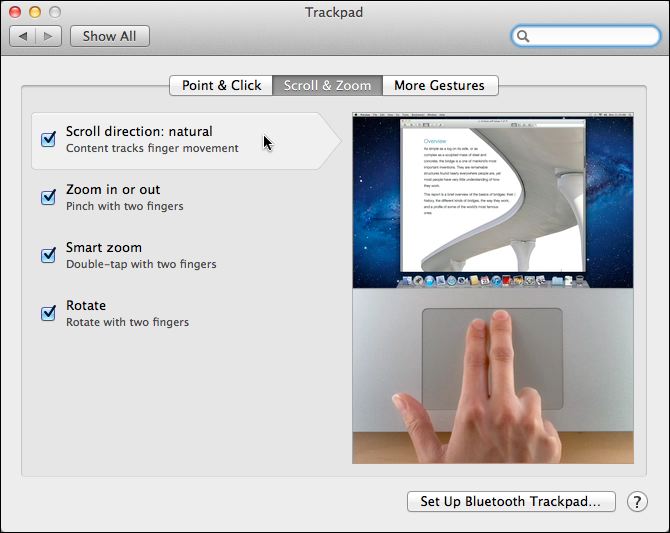 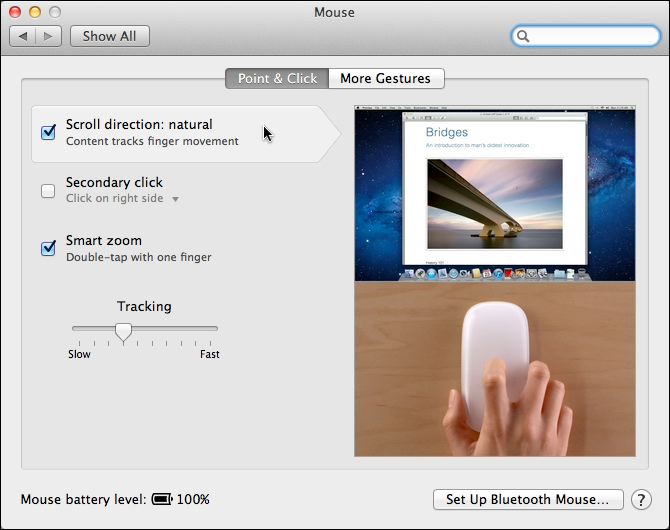 Personally, I recommend embracing the change and getting used to it. It really will seem natural after a while — especially if you have an iOS device that already scrolls like this.

In OS X Lion, when you open a new Finder window, it automatically opens the new All My Files window. This is Apple’s attempt to put all your data files in one place. 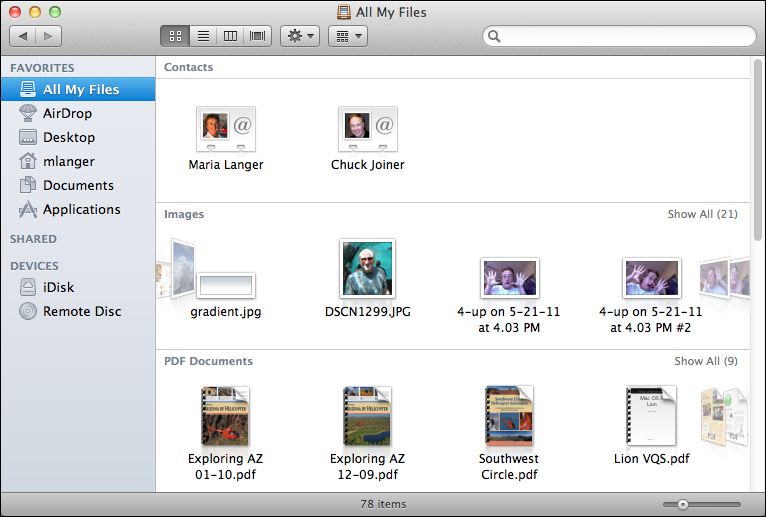 Figure 4: All My Files puts all your data files in one window.

There are a few interesting under-the-hood details about this window:

Of course, you’re not stuck with this window if you don’t want to see it. You can change the default new window to something you’re more familiar with, like your Home folder or Documents folder. You do this in the General pane of Finder Preferences. Just select a new option from the New Finder Window opens pop-up menu and you’re good to go. 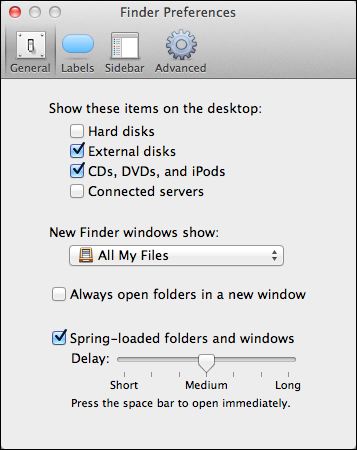 You should also notice some changes in Finder windows. 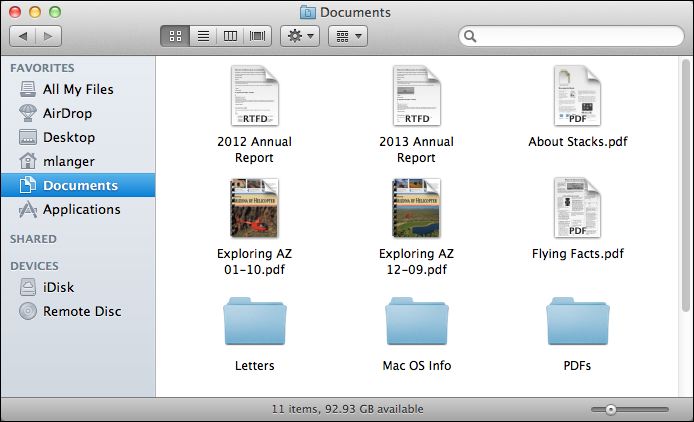 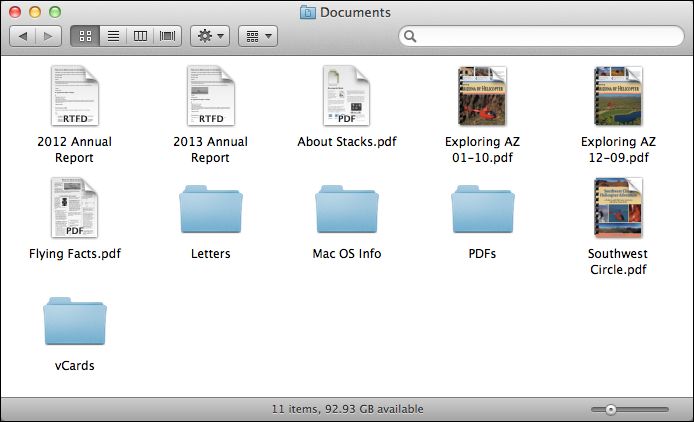 Figure 7: You can see the toolbar without the sidebar. 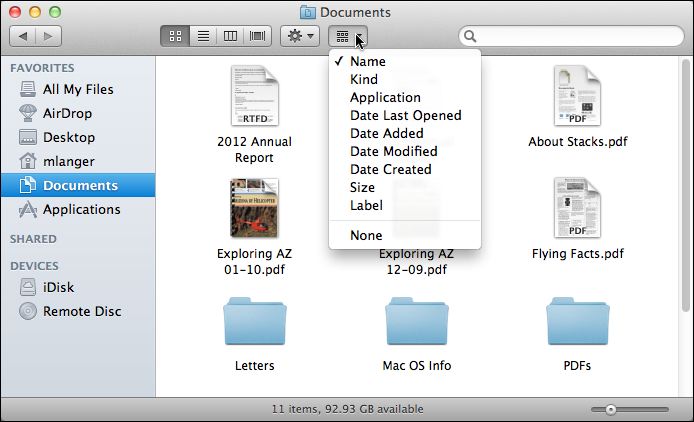 Figure 8: The toolbar includes a new Arrange By pop-up menu. 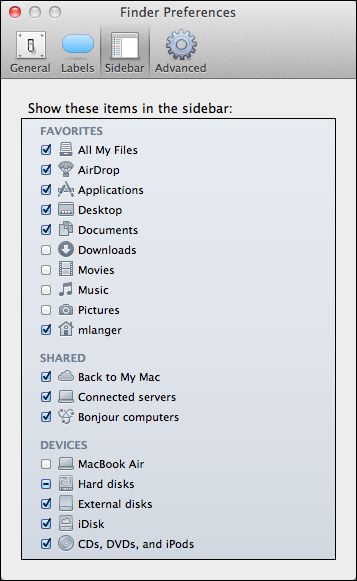 Figure 9: Change what appears in the sidebar in Finder Preferences.

If you’re the kind of user who likes to roll up your sleeves and dig into the workings of Mac OS, you may be surprised to find that the Library folder in your System folder is gone. It’s still there and still contains all the secret files that make Mac OS work the way you’ve set it up to, but now it’s invisible. Apple likely made this change to prevent users who aren’t quite as tech savvy as you from deleting or moving files they really shouldn’t touch.

Fortunately, you can still get into this folder to wreak havoc if you need to. In the Finder, hold down the option key and display the Go menu. You’ll see a Library command appear automagically. Choose that command and you’re in.

Figure 10: Hold down the Option key while displaying the Go menu to access the Library command.

In OS X Lion, Apple rolled the Exposé and Spaces features into one interface feature called Mission Control. So while Mission Control is brand new in Lion, it really contains two familiar features that we had in Snow Leopard. 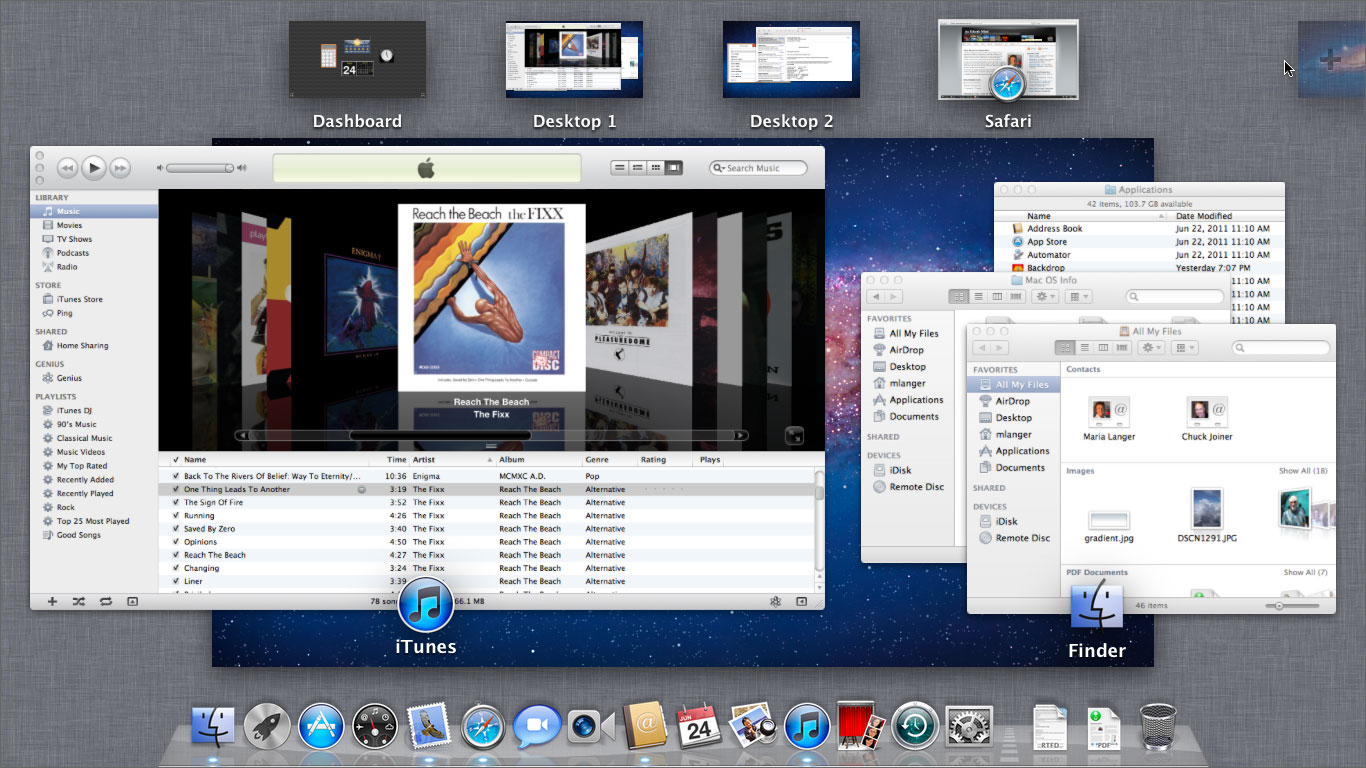 You can get into Mission control by pressing the Control-Up Arrow or swiping up on a Multi-Touch Device with three fingers. It might look something like this. Along the top are your spaces, including Dashboard, which now is a separate space, any Desktop spaces you might have created, and any full-screen app windows that might be open. The big area shows each of the applications open in that space, with their windows grouped together so they’re easy to see.

To switch from one space to another, you can press Control-Right Arrow or Control-Left Arrow or swipe left or right with three fingers.

To leave Mission Control, you can press Control-Down Arrow or swipe down with three fingers. Whatever space is displayed when you leave mission control is the space that will fill your screen.

I should also mention here that you can use the control-Arrow Key and three-finger swipe techniques to move from one space to another without even opening Mission Control. That makes it really quick and easy to navigate among spaces and full-screen apps.

You set up spaces differently now, too. But that’s a bit more involved than I can cover in this article.

Auto Save is brand new in Lion. Although it isn’t supported by all applications yet, support will grow with time.

Auto Save does just what the name implies — it saves your documents automatically while you work. It does this periodically and when you perform certain actions, including quitting the application. As a Snow Leopard user, you might find it a bit disconcerting that the App doesn’t even prompt you to save a file that has been changed when you quit.

Theoretically, in applications that support Auto Save, you don’t need to use the Save command at all — the application will save your document even if you haven’t bothered to give it name by saving it yourself. I don’t recommend that, though. Any document you plan to work with again in the future should be saved manually at least once to create file for the document on disk.

Auto Save makes the new Versions feature possible. Versions keeps track of the changes recorded for a file through automatic and manual saving. Then, if you want to revert to a previous version, you can use the Browse All Versions feature to find the one you want and restore it.

Figure 12: The AutoSave feature puts a menu of options in the title bar of document windows.

One new Lion feature that can really take Snow Leopard users by surprise is the Resume feature. Why? Well, it’s likely to open a lot of documents and applications that you didn’t expect to see open.

Resume has two levels of functionality.

Figure 13: The Resume feature gives you the opportunity of reopening all documents the next time you start up.

While there is a check box you can toggle when you shut down to prevent applications from automatically reopening, there’s no such option when you quit an application. The only way to prevent a document from reopening when the application opens is to close the document before quitting. You might want to keep this in mind if you often view private documents on your computer.

A bunch of Mac OS applications have also been updated for Lion. Some of them have a whole new look that’s considerably different from the way they looked in Snow Leopard. 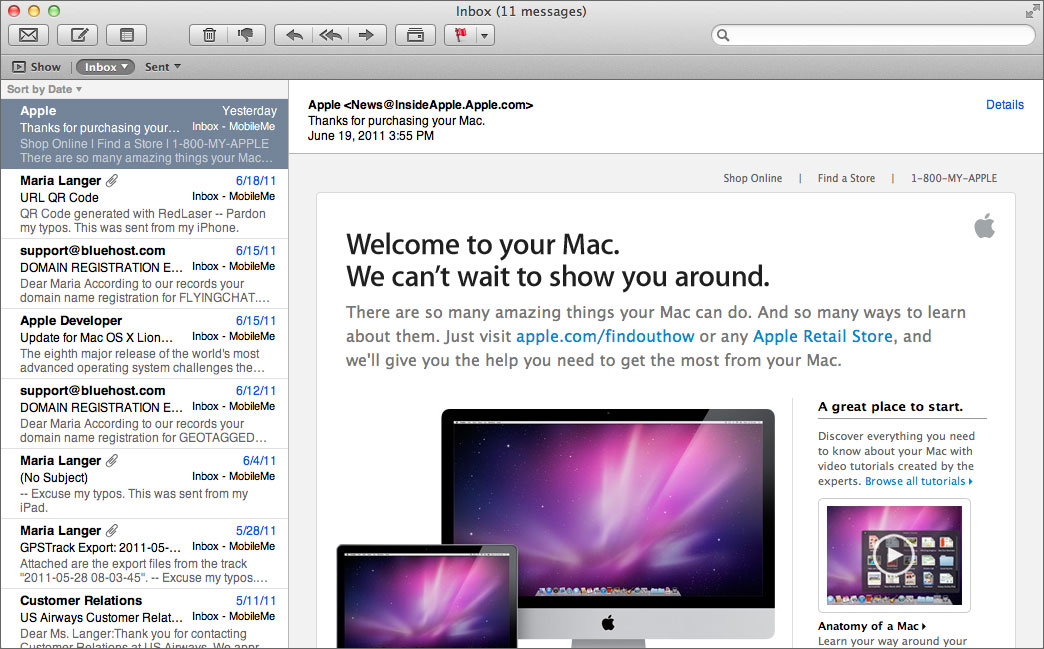 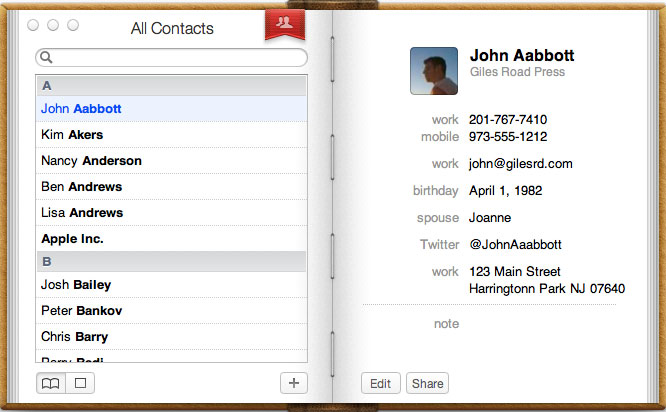 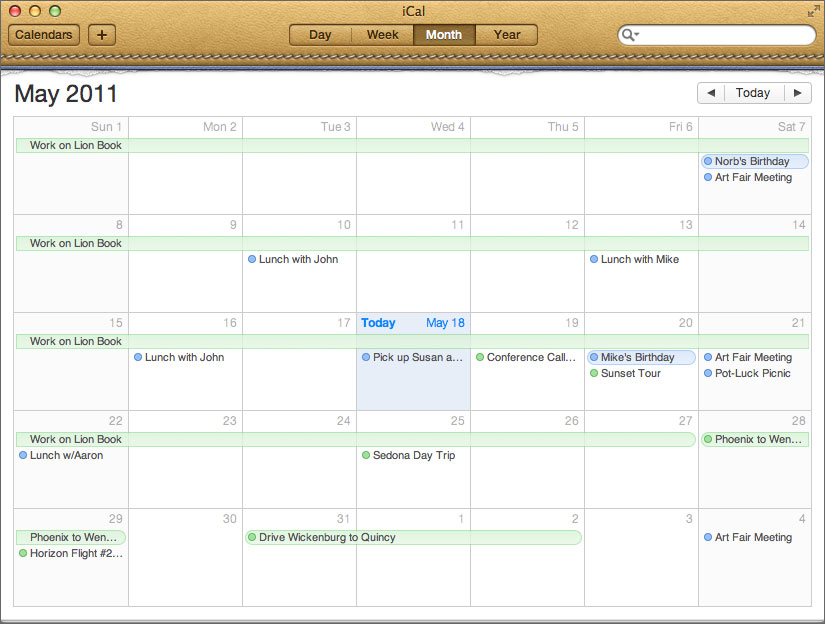 Figure 16: iCal’s new look is reminiscent of a desk blotter. 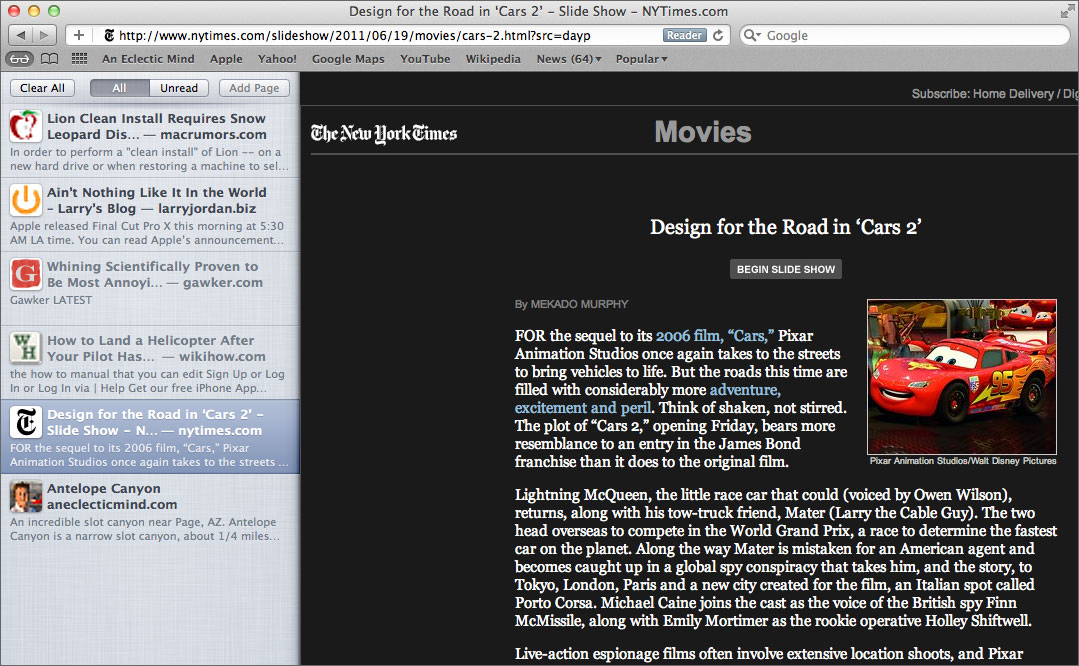 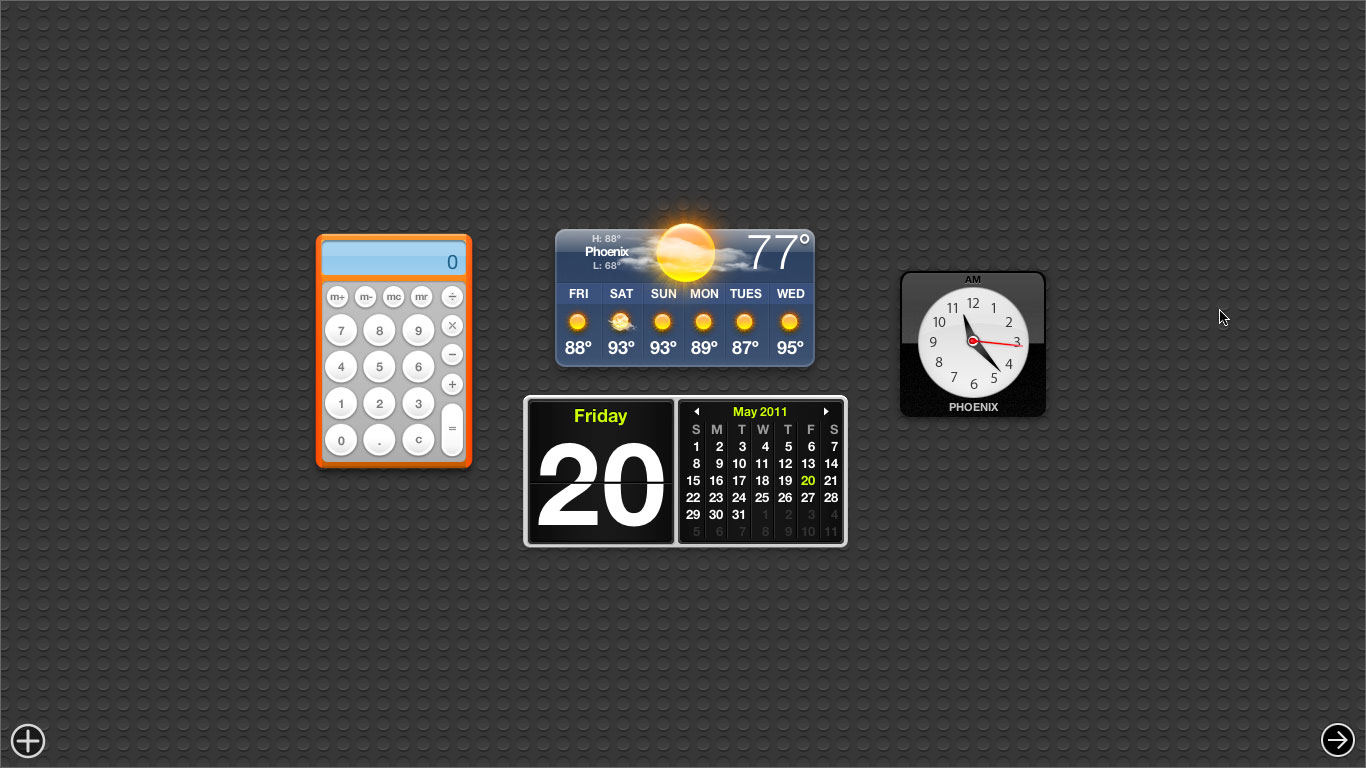 Figure 19: Dashboard looks slick in its own space.

You may also notice some changes in the System Preferences window. 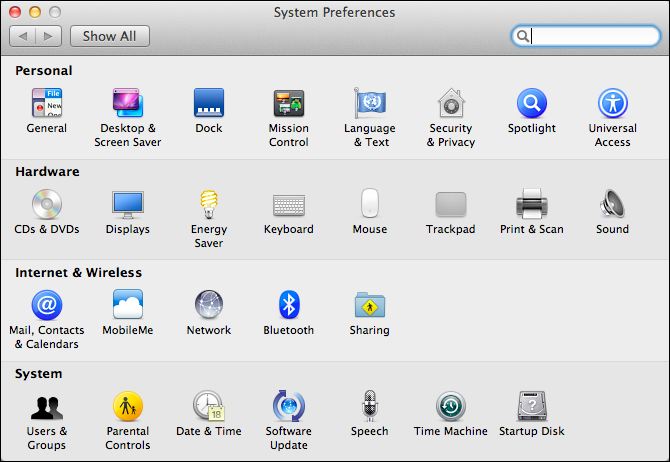 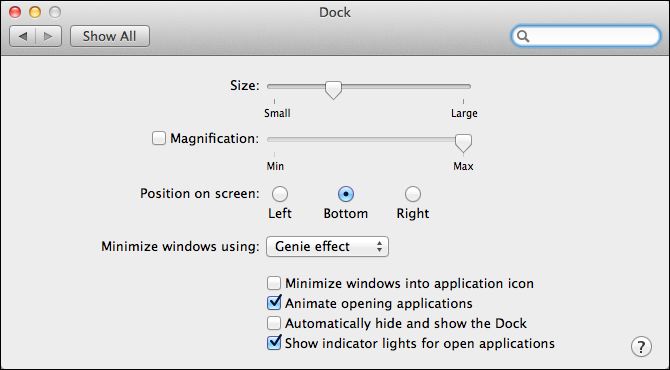 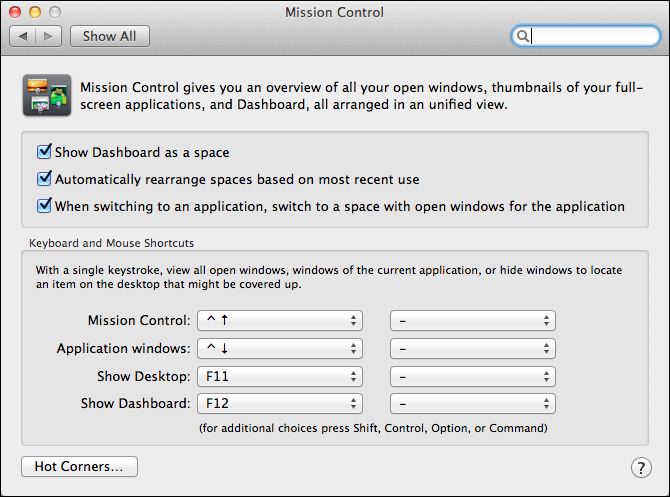 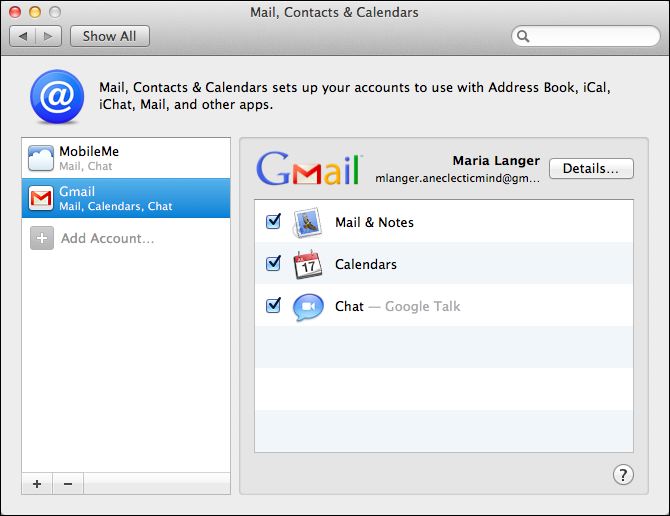 Figure 23: You can add accounts in the new Mail, Contacts & Calendars preferences pane.

Lion is a great new version of Mac OS, one with plenty of new features and interface changes to help make you more productive. I dug deeply into Lion while working on my book and was very happy with what I found. I’m excited about Lion and thrilled to be using it on my Macs. I think you’ll feel the same way!

Maria Langer is a freelance writer who has been writing about Mac OS since 1991. She is the author of Peachpit’s bestselling Mac OS X Lion: Visual QuickStart Guide. Visit her on the Web at http://www.MariaLanger.com.