"The Best Design Advice I Ever Got" with Maggie MacNab

Page 1 of 1
Maggie Macnab, author of Design by Nature: Using Universal Forms and Principles in Design, shares some of the wisdom passed down by her father and how it impacted her career in a life-changing way.
Be sure to check Peachpit for a new article every Tuesday. See more advice from other designers and photographers here.

Design by Nature: Using Universal Forms and Principles in Design

Design by Nature: Using Universal Forms and Principles in Design

I am the owner of Macnab Design since 1981 (I worked for typesetting and printing houses pre-computers beginning at age 16 in Albuquerque and Austin, and then for ad agencies until starting my own firm in Albuquerque), I have taught design theory since 1997 at the University of New Mexico, and more recently became contributing faculty for Santa Fe University of Art and Design, Santa Fe Community College, and the Institute of American Indian Arts in Santa Fe, New Mexico. I’m also the author of Design by Nature (New Riders, 2011) and Decoding Design (F+W, 2008), and past president of the Communication Artists of New Mexico (1997-9).

I've had some really spectacular and unexpected things happen in my career. It's really difficult to choose just one that is particularly notable, so I'll go with my top five in chronological order:

I've brought my father up in my books and shared his work in my first one, Decoding Design (F+W, 2008). Not only was he a brilliant architect and excellent artist, he was kind, a bit kooky, and passionate about nature. He loved animals, camping, and science fiction. He created a game called "Jikkawm" when he had severe asthma as a child and was kept home from school (late 1920s-early '30s). Jikkawm is an emergent game about alternate world economies, war, and different cultures (some had blue hair and yellow eyes!). He continued to develop Jikkawm throughout his life to play with friends and family—I had my own country at age 7...you can imagine how far that might reach into later adult life! I consider him my primary mentor and feel extremely lucky to hold a primary caretaker in that regard. He taught me to recognize and appreciate the path less taken, to always stand for what I believed in, and advised me to always "take care of number one." In a culture of "me, me, me!" this might sound self serving, but in this context, he meant I should listen to my heart first and foremost, to do what I knew to be right for me, and to have courage to persevere when it pushed me to the edge of my personal precipice. This is the only way to contribute who you really are to the rest of the world.

An example of this is my recognizing that ad agency culture was not a fit for me early on. Rather than try to contort myself into the corporate mold, I went out on my own as a freelance designer and risked failing miserably. I've continued to climb up instead of fall off that edge by setting my own benchmarks and achieving them. Had I not had this sort of support and unusual exposure in my most formative years, I don't know that I would have ever have followed such a non-traditional path or learned to create a life solely out of my love for it. This is why I teach. We are fueled from our inner passion, and I try to share that with my students. I am extremely grateful to be able to do what I love. Thank you, Daddy, for being the best father and giving the best advice ever. 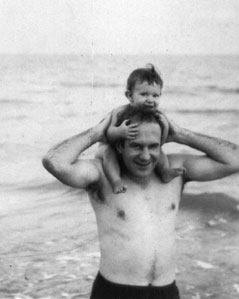