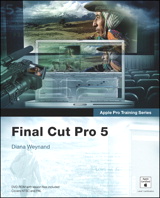 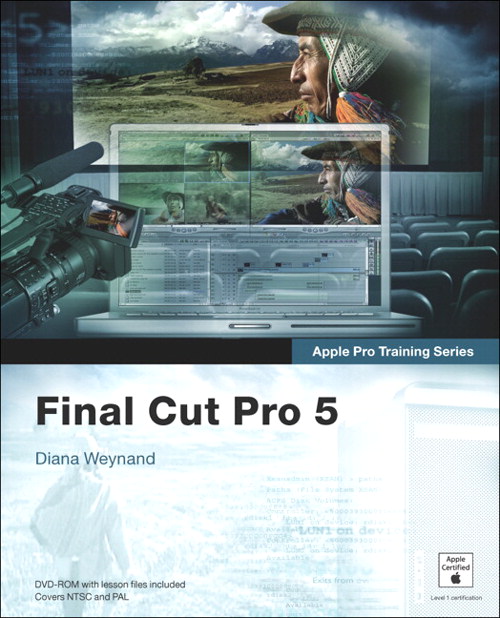 The scalability, performance and Emmy Award-winning workflow of Final Cut Pro 5 make it the first choice of professional editors everywhere. For those clamoring to get in on the action, this best-selling volume uses a series of class-length lessons designed to provide a strong foundation in all aspects of the digital video editing powerhouse. Readers follow the step-by-step instructions to complete the book's hands-on exercises, using the project files on the accompanying DVD. Master teacher Diana Weynand covers everything from basic editing skills to complex topics such as creating transitions and motion effects, real-time color correcting, titling techniques, and more. Previously published as Final Cut Pro HD, this revision has been updated to cover all of Final Cut Pro 5's new features, including higher quality effects, RT Extreme with Dynamic RT, editing multi-camera projects, closer integration with Apple's other creative tools and more.

Appendix A Introduction to LiveType.pdf

An in-depth interview with Diana Weynard

Q: Why did you decide to take your Authorized Final Cut Pro 5 Training course 'on the road'?

DW: Whenever I teach a Final Cut Pro class, people tell me how far they have to travel to take the Apple Authorized Training course or the Certified End User exam. I thought it would helpful to go to those places where the kind of quality training that my company provides was not available. So we decided to take Final Cut Pro "to the people."

Q: Which towns/cities will the tour take you to?

DW: We were recently in two Texas cities, San Antonio and Houston. Our next stop is Orlando in August and then we're on to New York City, Seattle, Minneapolis, Charlotte, and St. Louis in the fall.

The beauty of Final Cut Pro is that it's the perfect editing software for a wide range of people - and since this course is the introduction to Final Cut Pro, it's perfect for those who use FCP at home, in school or on the job. We encourage people who are moving up from iMovie to come take the class along side video professionals. And since Final Cut Express is so similar to Final Cut Pro, this is a great class for Final Cut Express users as well. We are also getting tremendous response from the education community, teachers at the K-12 level, continuing education, and university, and of course media students at all levels.

Q: Does your training course cover other applications in the Final Cut Studio, like Motion 2 or Soundtrack Pro?

In certain cities we are offering more than just Final Cut Pro. For example in the Orlando stop in August, we are offering a MEET THE AUTHORS TOUR at the University of Central Florida. I have invited Mary Plummer and Estelle McGechie, both authors of Apple Pro Training Series books, to come join me to teach their specialties, Motion and Aperture. So in addition to Final Cut Pro, we're holding Motion and Aperture classes.

Q: As well as leading your hands-on training courses, you have also written the authorized Apple Training book for Final Cut Pro 5. Where do you find the time?!

It can be a challenge to juggle everything. But writing the Apple Pro Training Series books has been a terrific opportunity and a lot of fun. And it keeps me on the cutting edge of software development for my favorite application.

Q: What are some of your favorite new features in Final Cut Pro 5?

DW: I used to direct multi-camera shows at a PBS station. So I love the new Multicam feature in FCP 5. I'm passionate about getting people to work with the multicam feature, regardless of their level. People often associate multicam with huge arena sporting events or sitcoms, but in fact anybody can put it to use. For example, imagine a school sports event or performance. Or even a breakout game on a weekend. Or a home poker game. Most of the time, if you are interested in shooting an event like this, you take your DV camera and shoot one wide shot which you can't really see very well when you get home. Or you shoot the close up of your loved one and don't see anything else. So we encourage shooter and editors to organize themselves. Get together with other shooters and position the cameras around the event. Then ask for all the tapes and go home and edit it using Final Cut Pro's multicam!

DW: I think it's coming...the temperature is definitely rising. It's always hard to let go of a particular way of working. But we are doing more and more Avid to FCP switch training. NBC/Universal recently added a couple of new dramatic TV shows and they're both using FCP. I certainly think every producer is now thinking about FCP as a viable alternative.

Q: Where do you see the future of Final Cut Pro?

DW: Well, we're already starting to see the same kind of saturation and awareness in the media market that we did in the early days of Photoshop. Originally, Photoshop was a high-end technical tool for professionals. Today, Photoshop is a household word. Everyone knows what Photoshop does. People say "You can Photoshop that out," referring to making photo corrections.

I think that's where we're going with Final Cut Pro. Why? Because with video you can tell a story. There is a new surge in media taking root at the K-12 level. Teachers are starting to understand that they can utilize media tools like Final Cut Pro to teach kids how to communicate more effectively. They're using it to teach them to tell a story. When I was in school I learned to write stories. Kids today are learning to tell stories by shooting and then editing the material into a concise form.

In the high-end professional world, Final Cut Pro is being adapted by more and more television shows and films. Why? Because you get so much power in one box - with DVD Studio Pro, Soundtrack Pro, and other applications - for such a small price! Especially now with bootcamp and Leopard on the way, one computer manufacturer can give you both OSX and XP. It's inevitable that we will see more and more people switching to Apple computers and subsequently to FCP.

But what's going on in the school systems today with media education is the most exciting development I've ever witnessed in a long time.

Q: How did you get your start in the world of video editing?

DW: Don't laugh - but I look back and realize I've been editing all my life. I was a big collage maker. So I would cut out pictures and paste them in some order to tell a story. My first video editing experience came at a Public Television Station in South Carolina on a series about great film directors, called "Cinematic Eye." I was the producer/director of the series and could never find an editor on weekends or late at night to help me cut the show - so I ended up teaching myself the craft and editing it on my own.

Q: What or who inspires you?

DW: I have the greatest respect for the vision of Steve Jobs and everyone at Apple. For a company that has such a small percentage of the computer market share, it's surprising how much influence Apple has on our culture, with the ipod, podcasts, and applications like iTunes, iPhoto, and GarageBand. They've changed the way we listen to music and share photos.

On a more personal level, I'm inspired by people whose passion is contagious and who are generous with their knowledge. Even though people know me as a teacher, I'm a lifelong student and love to learn. So when someone takes the time to really teach me something, that's truly a gift.

Q: Who is your favorite film/TV editor and why?

DW: I guess I'd have to say Robert Wise is top of my list. Although we know him more as a director, I admire the way he started from the bottom and worked his way into the editing chair. I think he had a really good sense of timing that we're able to see in the films he directed as well. I like all good editing and am not at all tolerant of poor editing. I count West Wing and Stargate SG-1 as favorite edited TV programs, and Independence Day and Chicago as beautifully edited films.