Getting the Most out of Your iPhone 4 Video Camera

Learn More Buy
What the iPhone 4 Video Camera Doesn't Do

What the iPhone 4 Video Camera Doesn't Do

The iPhone 4 has a pretty amazing camera phone—but it's still a camera phone. There are applications, hardware, and adapters designed to turn the iPhone 4 camera phone into a more serious contender, and we'll glance at a few of those, but for certain shooting scenarios even the iPhone 4 simply isn't up to task on its own. Let's take a look at the camera features you might miss if you want to cover an event—or even just a candid moment—well.

Although the tap-to-focus feature is nice, it's hardly at the level of control that you would want if you're a videographer who's used to having some manual control. Aside from lacking user-controlled exposure and focus options, the camera automatically adjusts the two together, which is limiting. Camcorder manual control offers a range of options, from fully manual (aperture, shutter speed, focus, white balance) to various semiautomatic settings of those characteristics (such as portrait mode, landscape mode, daylight mode, tungsten mode, and so on). This range allows you to change the texture of your shooting—on one end, permitting a shallow depth of field and its associated texture, and on the other end extremely sharp and clean images. That range of texture simply isn't available on the iPhone.

Applications are available that can give you additional control of your iPhone video camera; a few good ones are ProCamera, Camera+, and FiLMiC Pro. These applications not only help give you more range in shooting capabilities (shooting modes, selectable resolutions, more control of exposure, and so on) but also allow post-production within the app. At $1.99[nd]$2.99 each, it's worth testing these apps if you want to increase your iPhone's shooting capabilities.

Any handheld video can be shaky. But at a mere 4.8 ounces, the iPhone 4 is significantly shakier than a more substantial camcorder. Furthermore, the iPhone 4 lacks the tripod or monopod mount that many videographers use to avoid the shakes altogether.

Coupled with the fact of its lightweight design and often casual, candid use, which encourage shaky video, no image stabilization is offered on the iPhone camera. These facts can lead to especially shaky images. That may be perfectly okay for the cute 20-second clip of your daughter learning how to ride a bicycle (well, hey, she's shaky, too!) but significantly less acceptable for a 5-minute clip of your daughter receiving her diploma.

While there is no iPhone in-camera solution (or, more correctly, mitigation) for handheld camera shake, a few workarounds are available. In iMovie (a $4.99 app made by Apple), you can add image stabilization in post-production, as shown in Video 3; other post-production video-editing apps offer the same option. The feature works by analyzing each frame of video to find matching patterns and lines them up more closely, eliminating shake and smoothing out motion. Hardware solutions are also available; for instance, mounts such as the OWLE Bubo that allow you to attach your iPhone to a regular tripod. The OWLE Bubo mount also includes an external lens, which explains its $160 price tag. Significantly less expensive iPhone tripod mounts can be found in a number of sizes and styles. 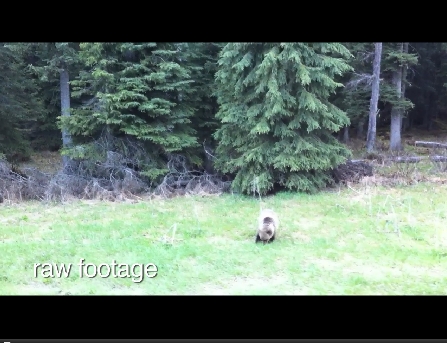 You need to upgrade your Flash Player. You need version 9 or above to view this video. You may download it here. You may also see this message if you have JavaScript turned off. If this is the case, please enable JavaScript and reload the page.

The image-stabilization capabilities of iMovie are impressive, as indicated by this clip. Notice that when the clip is stabilized, the framing is closer up. In order to perform the stabilization, the image will be zoomed in, to give room to pan the image around slightly. Too much image stabilization can create an effect that looks as if it's rolling somewhat—almost distorted. An example of this problem is clear in the second stabilized image.

You're unlikely to run down a fully charged iPhone 4 camera battery (built in, rechargeable, lithium ion) simply by shooting video; you're far more likely to run out of memory first (although continual use of the LED sensor could change that prediction). However, you may only have a partially charged battery—for example, because you've also been using your iPhone as a media player, a gaming device, a text editor, or maybe even as a phone. In that case, it would be pretty easy to find yourself in a situation where you didn't have enough battery life to capture all the footage you needed. With a traditional camcorder, that's no problem: Pop the battery off and grab your spare one, fully charged and ready to go. You can charge them both at home later.

With an iPhone 4, on the other hand, you have to dig the charger out of the bottom of your purse, look for an outlet, hover over your phone while it charges (if you're in public), and then resume shooting when you get enough juice back. Clearly this plan has some flaws if you were trying to shoot your son's football game, starting with the lack of outlet and ending with his touchdown that you missed capturing. Lots of companies make battery extenders, some with sleek designs intended for everyday use, others with bulky add-ons that are uncomfortable to attach while actually using the phone. The range of prices on extenders is similarly wide.

Assuming that battery life doesn't slow you down, let's talk about media space, which may also be a limiting factor. The iPhone captures 720p video at a data rate of 10 megabits (Mbps) per second. That translates to about 80MB of storage space needed per minute, or 4.8GB per hour. If you have the 16GB model iPhone 4, you'd have about 3.3 hours of video storage, assuming that nothing else was on your phone. But all those games, albums, TV shows, and apps (not to mention the video you haven't backed up yet) are bound to get in the way. Tape-based camcorders obviously aren't subject to such time limitations, and hard drive camcorders tend to offer more storage space and coexisting card-memory storage. If your phone is going to be your primary camera at an event, consider your storage needs ahead of time. It's pretty easy to capture the vows, but if you're looking to shoot the wedding from processional to driving off into the sunset, the iPhone 4 probably can't do it without a media transfer somewhere in the middle.

The iPhone 4 has two microphones. One is on the bottom of the phone, next to where it's docked. That microphone is the main audio collector and the one associated with the video camera; it's a non-directional microphone that collects mono audio. An additional microphone sits near the headphone jack at the top of the phone. This mic is used for FaceTime calls and for audio suppression—improving the sound of the primary microphone.

Because non-directional mics take in all sound equally, they're good at capturing everything, but bad at capturing a specific something. The important audio of your clips might not be any louder than the hisses, pops, hums, and other ambient sound you're shooting. That noise can clutter up the clarity—or even the intelligibility—of your audio. Furthermore, you can't aim your iPhone microphone at what you're shooting in order to improve the sound, because you're probably holding the camera steady and carefully positioned in order to get your video angle. It's safe to say that while the recording capabilities on the iPhone 4 are often acceptable, you can't rely on them to capture especially important moments, should there be sound interference of any sort.

If audio is important, you can dramatically improve the quality of your iPhone 4 audio recording by getting an adapter that allows you to take an audio feed from an external microphone. Adapters are made for all types of audio jacks: XLR, 1/4-inch, 1/8-inch, and RCA are some of the more common types. A number of applications, such as FiRe and iProRecorder, can help turn your iPhone into a much more advanced field audio recorder; however, those apps are harder to use while you're also shooting video. Some video apps include audio metering, but unless you're using an external mic, you'll be limited in audio quality by the iPhone microphone hardware.